Discovering the Costa Blanca in autumn

The Costa Blanca offers a multitude of nautical and maritime activities throughout the spring and summer periods, but with the arrival of autumn the average temperature of the sea falls below 20 º, making sports such as diving, swimming in open water, kayak or any activity that forces us to wear a bathing suit less attractive.

However, the Costa Blanca offers hidden treasures among its many hills and mountains to be traveled through, different hiking trails that we can not miss, and this time of the year is ideal period to discover them. The region has incredible natural parks that we recommend you to visit: Sierra Mariola (Alcoy); La Font Roja (Alcoy-Ibi); El Montgó (Jávea-Denia); El Marjal (Oliva-Pego); The Peñón de Ifach (Calpe) and the Lagunas de la Mata;  Sierra Helada  (Altea-Albir-Benidorm); The Salinas de Santa Pola and El Fondo (Elche-Crevillente). In most cases these ecosystems offer diverse services to improve  the comfort of the visitors, such as indicated routes with basic information (distance, estimated time, height and difficulty), paved roads to the main access points, rest areas and informative panels.

In our blog from this month we suggest routes through these natural parks that will reveal an unknown and surprising face of the Costa Blanca. As always, in name of Villas Internacional we ask you to respect the environment and deposit the garbage in the places enabled. In addition, it is important to respect the local flora and fauna that you will find along the way to ensure sustainable tourism. Due to the high risk of fire in the region, it is forbidden as a general rule to make a fire outside the spaces enabled, consult the website of the local authority concerning the fire alert level to know the restrictions established at any time.

Remember also that if you are interested in any of these areas at Villas Internacional we are specialized in finding your ideal house on the Costa Blanca. Whether you are looking for a country house, a luxury apartment or apartment, a villa, a luxury villa or parcel, our experience and knowledge of the area will help you locate your next property and we will help you during the entire purchase process so you don’t have to worry about anything. Do not hesitate to contact us to ask for more information or to request a personalized guided tour in which we will take care of all the details of your visit of the Costa Blanca.

Sierra Mariola Natural Park
The park is located near the town of Alcoy and is crowned by the Montcabrer, a massif that  reaches the 1,389 meters in its highest peak. Its subterranean aquifers give rise to multiple springs and fountains that dot the whole surface, contributing to the growth of a vast vegetal layer populated by holm oaks, ash, maples, yew trees and many aromatic and medicinal plants. The fauna is formed mainly by the wildcat, rabbit, wild boar, badger, martens and weasels.
We can also find important archaeological remains that range from the Middle Palaeolithic to the Middle Ages. 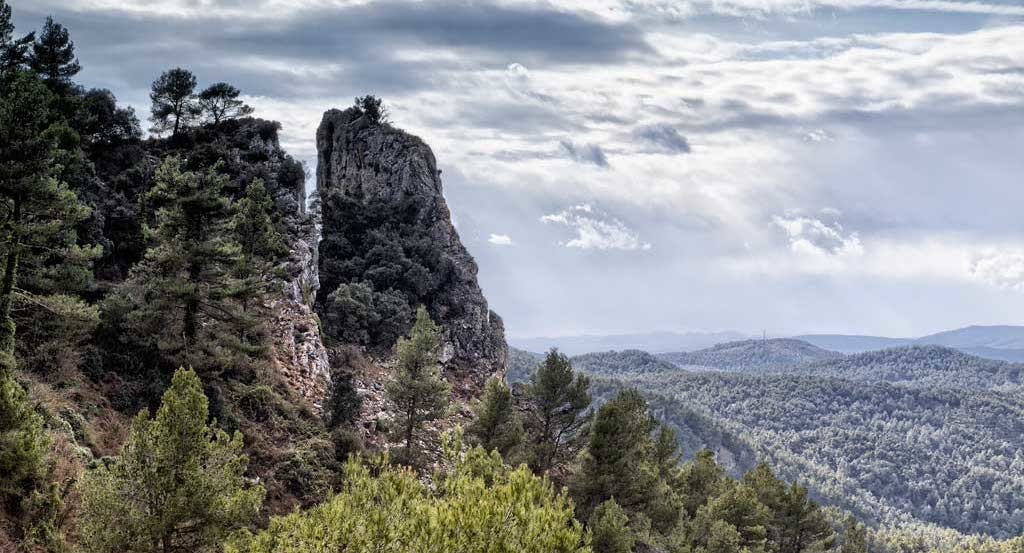 This natural park is close to the previous one, and they share a similar fauna. Its vegetation is abundant and it is well preserved, with olm oak forests, ivy and honeysuckle. We can also find traditional architecture jewels like the Nevera Coloma, an old snow well used to conserve food.

A park composed mainly of aquatic vegetation and characterized by the high quality of its waters. This quality encourages the existence of endemic species such as nenufar and invertebrates in the area such as gambetes (small prawns) and the European tortoise (a species of small tortoise).

Photo: Oliva Turismo
El Peñon de Ifach
An imposing limestone massif on the coast, emblem of the municipality of Calpe. Despite its verticality, there are some native plant species and fauna composed mainly of birds such as the Peregrine falcon, the swift and especially the extensive gull colonies where they nest taking advantage of the protection provided by the rock.

Photo: www.calpe.es
Sierra Helada natural park
Another Natural park of Littoral type, consisting of 80% of marine space and 20% terrestrial between the municipalities of Benidorm, Alfaz del Pi and Altea. The park covers both the Sierra and the four islets that surround it: the island of Benidorm, Isla Mitjana, La Olla and La Galera. The cliffs of the Sierra rise more than 300 meters high until reaching the governor’s Alt at its highest point to 570 meters.
Its fauna and flora is exceptional, with Mediterranean forest on its inner face and the hillside that faces the sea houses species capable of withstanding the abrasion of sea salt and wind. It also highlights the presence of a unique hanging fossil dune. The marine environment is composed of meadows of Posidonia Oceanica, a symptom of the good health of its waters.

Photo: Costablanca Pro
El Montgó Natural Park
Located in the town of Dénia, it is characterized by the presence of large cliffs that give refuge to numerous coastal birdlife such as the Gull, the cormorant and the Shearwater. We can also spot Bonelli’s eagles, peregrine Falcons and the royal Owls. Its vegetation is dense, formed by typical Mediterranean pine forests, but also thistle and Zamarrillas. As for archaeological sites, we can find two Iberian settlements.
La Mata-Torrevieja Natural Park
The natural park located in the south of the Costa Blanca, in Torrevieja. A spectacular saline that houses typical Mediterranean species in its surroundings.

Photo: Ayuntamiento de Torrevieja
Las Salinas de Santa Pola Natural Park
Another example of artificial saline created by human action, preserved to this day by the economic activity it provides. The most emblematic species for its beauty and color is the flamenco, which chooses this ecosystem as a compulsory stop on its migratory routes.
El Fondo Natural Park
An important wetland located between the towns of Elche and Crevillente, which gives shelter to many endangered species in the process of recovery, such as the Teal and the Malvasia (two types of indigenous ducks). The park began as a lagoon transformed into a reservoir to regulate the irrigation of the surrounding fields.

Have you visited any of these parks yet? Are you thinking of acquiring a property nearby? Contact us and we will help you to find your ideal house on the Costa Blanca with the whole process of buying covered.

What do I need to buy a house in Spain?

We enter June and begin to notice a gradual increase in temperatures, which reminds us that in a...